Roaming Through Rockland: Biking the Trails at Blauvelt State Park

A park that was once home to an army rifle range now welcomes mountain bikers to the challenging trails snaking through its dense forest. 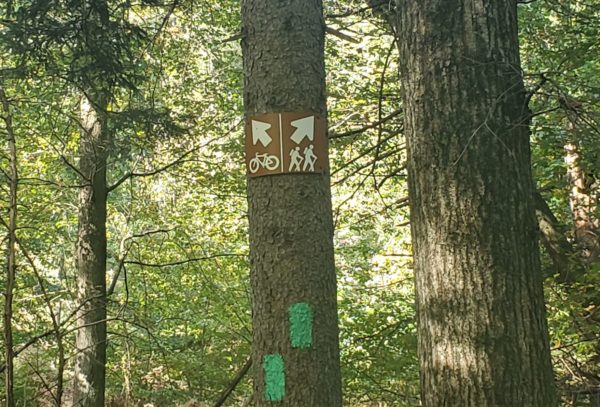 Since 2017, the 644-acre Blauvelt State Park has been a popular destination for riders traversing some five miles of looping trails featuring terrain including rock gardens, log-overs, streams, and a diversity of non-technical climbs and descents.

The well-constructed network of trail segments — mostly beginner (green) and intermediate (blue) segments, with one black diamond loop at the end  — have catchy names like Barney Rubble, Tunnel Funnel and Swamp Thing. One trail crosses into the adjoining Tackamack Town Park, and others occasionally intersect with short, rideable portions of the Long Path.

The multi-use trails, which accommodate hikers, runners and bikers, were built with private funding and are maintained by Palisades MTB, in cooperation with the Palisades Interstate Park Commission. The single-track paths are among the only ones in Rockland County where mountain biking is legally permitted, according to Nyack's Seth Reichlin, who chairs Palisades MTB.

Ditch that image of Red Bull-fueled teen riders shredding trails with little regard for life, limb, or locals. Palisades MTB members trend toward middle age and coexist peacefully with nonriders.

"When you design for multi-use, you generally have good sight lines so that nobody is surprised by a bike coming up," Reichlin said. "That's the design principle. No surprises. We've never had a problem."

The club's trail-building projects have actually benefited the environment by removing silt and obstructions from waterways to improve the flow and prevent muddy buildups. 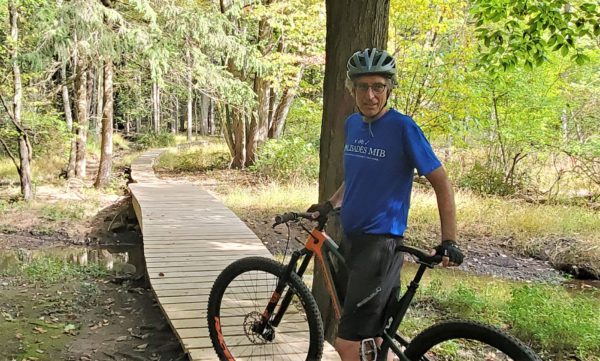 Seth Reichlin gets ready to cross the bridge Palisades MTB built over the Swamp Thing trail segment on Oct. 12, 2021. Photo by Robert Brum. 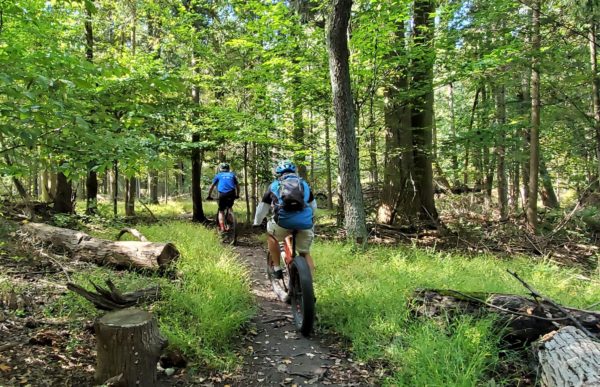 Birth of the Blues

The land encompassing Blauvelt State Park has had a long and interesting history. Originally named Camp Bluefields ("Blauvelt" is Dutch for "blue field"), it was founded in 1909 by the New York National Guard as a rifle range. It shut down a few years later after neighbors protested that stray bullets were striking their homes.

After years of serving as a summer camp for the YWCA and Columbia University, the site reverted to military use as a training facility around World War II. It was abandoned after the war.

Although the land has since been allowed to return to its natural state by the Palisades Interstate Park Commission, graffiti-covered ruins remain as hints of the site's past.