Roaming Through Rockland: The Path on the Mario Cuomo Tappan Zee Bridge

The view that most of us have of the Hudson is limited to what we can see from the banks of the river at public parks or peeks we get between the historic homes along the river. The Path, a shared bike and pedestrian space on the Mario Cuomo Tappan Zee Bridge, adds a new perspective to stop, sit, and contemplate the spectacular views of the water and the shoreline. 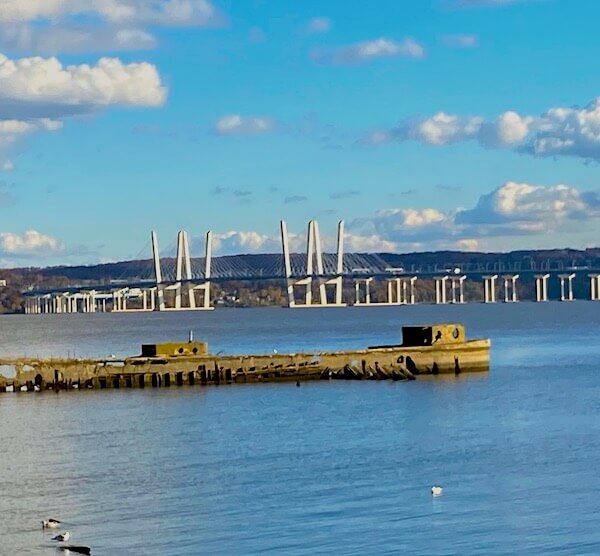 Spanning the river at its widest point, the Mario M Cuomo Bridge links New York's Rockland and Westchester counties via the NYS Thruway (I-287). Originally called the Shared Use Path (or SUP) by bridge planners, The Path was designed to serve as a tourist attraction, a recreation amenity and a transportation alternative.

Six overlooks along the 3.6 mile path offer walkers and cyclists views and information about the Lower Hudson region. Each rest area includes touch screen displays with information about the geography, history, and geology of the Hudson. The NYS Thruway, which built and maintains the bridge, describes each overlook:

There are two dedicated parking areas on each side of the river. The Westchester landing has space for 130 cars; the parking lot on the Rockland side can hold 57 vehicles. There's also off street parking in residential neighborhoods adjacent to the western terminus of The Path where you can park a few blocks away and ride your bike or walk to Nyack's entrance to The Path. (A few streets adjacent to the bridge have No Parking signs.) 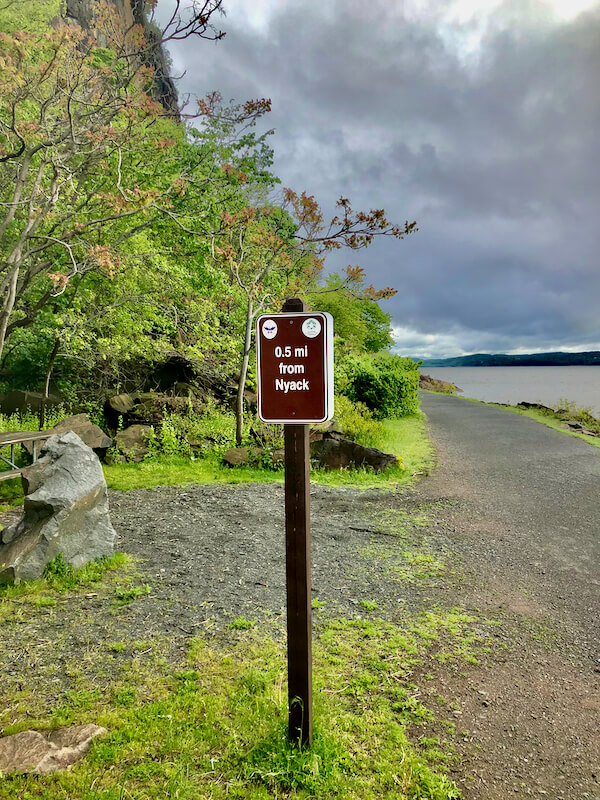 If you park at the Rockland Landing and cross The Path going east, you can go south on the Riverwalk (a paved multi use trail) and the Old Croton Aqueduct (not paved and bumpy) two miles to Irvington or four miles to Dobbs Ferry. Downtown Tarrytown is one mile north of the bridge, however, there's currently no safe way to bicycle there without riding on sidewalks. To address this shortcoming, Scenic Hudson is championing a plan to connect The Path to the Riverwalk which will connect the north and south sections of the Tarrytown Riverwalk and make it easier to bike to the Tarrytown Metro North Train Station.

The Esposito Trail also connects to Piermont where you can walk the iconic Piermont Pier. Be aware that the three miles of trail south of the bridge are unimproved and best suited to walking, hybrid and mountain bikes.

What to Know (and what to bring, too)

This is *not* the Brooklyn Bridge or George Washington Bridge paths. The Path across the river between Nyack and Tarrytown is longer. And possibly louder.

The 12 foot lane is divided into a four foot track for pedestrians (on the north side, closest to the water) with the remaining space for cyclists (closest to the highway). But it's a tight squeeze: both bike and pedestrian lanes are for bi-directional. So it's more like four lanes squeezed into 12 feet. Be alert, and be courteous to everyone around you when walking and cycling.

Consider this scenario: Two couples approach each other on The Path. Both couples are walking side by side. Add two bicycles going in opposite directions at the point where the couples will meet each other. In a perfect world, the path would be 19+ feet wide (4 +4 feet for each pair of pedestrians 5 + 5 feet for the cyclists + 1 foot buffer) to give everyone sufficient space to pass without bumping into each other. Something's gotta give to get 19 feet of needs into 12 feet of space.

"Anyone using The Path should remember it's a shared space and they are not the only people using it," says Glen Williams, a member of the Rockland Bicycling Club and a retired NYS Trooper who used to patrol the bridge on a bicycle. "I have seen and experienced walkers, joggers and kids on bikes dart out into my path. Many people think it is okay to walk two or three across and when someone is coming in the opposite direction. They don't go single file when there is approaching foot traffic and instead just dart into the bike lane of The Path without looking in both directions."

Here are best practices to consider when walking or cycling The Path. 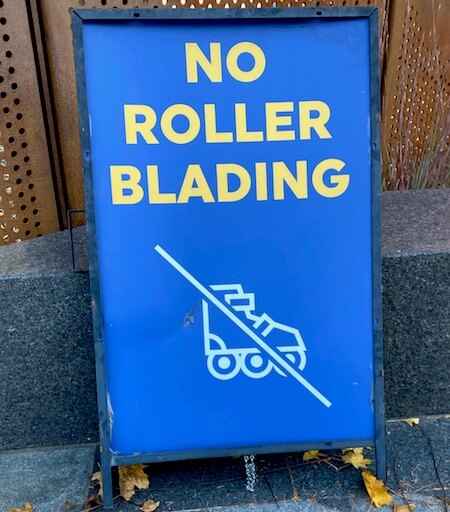 Williams adds that crossing the river on the Path isn't a walk in the park — literally and figuratively. The sound of adjacent traffic on the NYS Thruway can make it hard to hear one another. Take proper precautions to bring water and wear sunscreen if you intended to walk the full 7.5 miles across the bridge and back. "It was very hot in June 2020 when the SUP first opened. Many people would walk and run without a bottle of water in their hand. Many did not think about how far it is to run 3.6 miles in one direction when you are feeling dehydrated." There are call boxes along the bridge to summon help, but it's best to be prepared and stay out of trouble. 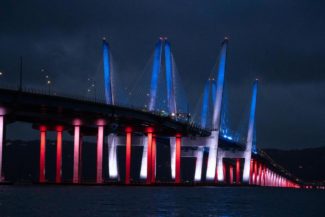 The Path is open every day from 6a to 10p. Holidays and weekends tend to be busier, but most of the time there is ample parking and the Path isn't too crowded. When you visit, stop at a few of the rest areas to take in the sites, admire the public art, and read about the history of the Hudson and its river villages. There are bathrooms at the Welcome Centers on both the east and west sides of the bridge, and maps directing you to tourist attractions and business districts in Rockland and Westchester.

For a guided tour of The Path on foot or on two wheels, you can download the TRAVELSTORYSGPS mobile app. If you choose to listen, please wear just one earbud and leave your ear facing the bike or pedestrian lane uncovered. Cycle, walk and listen… safely.

When the weather is warmer, consider walking or cycling The Path after dark and take in the view of Tarrytown and Nyack from the river under the colorful LED lights of the bridge. You can do this any day until 10p, but the north wind blows cold in the winter, so save this special visit for the late spring, summer and fall.