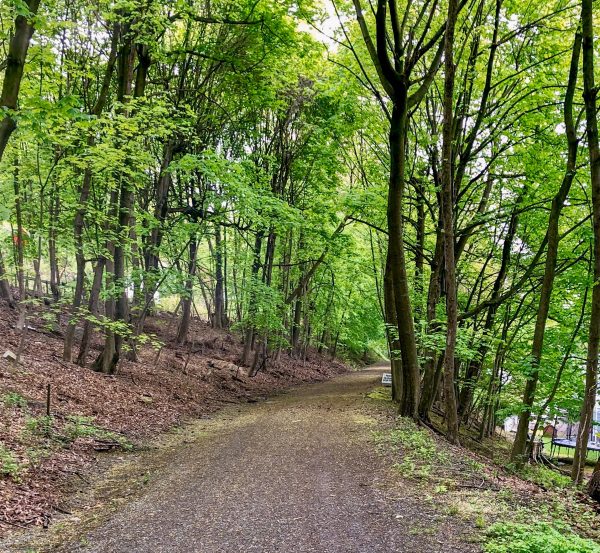 Roaming Through Rockland: The Esposito Trail

If you feel the need to recharge some Sunday morning and get some exercise, but not too much, plus maybe a little something to nosh along the way, the Esposito Trail between Nyack and Piermont in Rockland County is just what the maitr'd ordered. The Esposito Trail combines a pleasant ride with interesting historical stops and some quality restaurants. There's a short version from Nyack to Piermont and back that's about 6 miles, and a longer version through Tappan that's around 10. And only one real hill between them.

Start at the corner of S. Franklin and Clinton Ave. in Nyack. A hybrid or a mountain bike is recommended for this ride. Head south on the short bridge over I-87. The trail crosses South Broadway a few moments later and the trip really begins. Route 9W disappears above and soon the sound of cars is inaudible. You're on a wide path in the woods that cuts across a steep hill down to the water. Sweeping, panoramic Hudson River views abound, and the canopy formed by the trees make this an ideal ride for a hot summer day. A small bridge over a stream about halfway makes a nice spot for a water break. After 3 miles you'll arrive at the Piermont Train Station on your right. Built in 1873 and recently restored, it's a picturesque glimpse into the past.

If this is far enough, take Ash Street down the hill and into the charming village of Piermont. Brunch at Confetti for Italian or Sidewalk Bistro for French or the Rivertown Tap House for American fare. A nice side trip is to the Piermont Pier where you'll find a lot of history as well as great views of the river. Many American troops in World War II began their journey here. To avoid the steep hill back up to the Esposito Trail, head back along Piermont Road, which runs right along the Hudson. After passing under the Tappan Zee you face the only significant hill on the ride, from under the bridge up into South Nyack. As hills go, it's not too bad, especially if you keep your momentum from the downhill that takes you under the bridge. 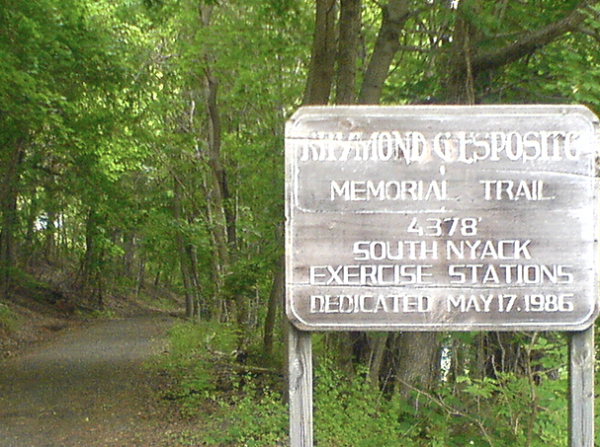 For a slightly longer trip that includes more history, continue on the Esposito trail past Piermont Station to a long downhill into the town of Sparkill, where you can stop at the excellent DVine Bar. There the Esposito Trail ends at the Joseph Clarke Trail, a paved path that runs from the town of Tappan north to Blauvelt. Turn left and head south toward Tappan. No more dirt from here on. The (very level) trail soon ends at Oak Tree Road. Hang a right, cross Rte. 303 and you'll soon arrive at the DeWint House, which twice served as headquarters for George Washington, and was where he decided the fate of John Andre, the British spy who was hanged for attempting to smuggle the plans of the fort at West Point from Benedict Arnold to the British command in New York. Bad idea.

Continuing along Oak Tree Road, you soon arrive at 1776 House in the center of Tappan, which claims to be America's oldest restaurant. The food is great but it's worth visiting just for the gorgeous old stone building and beautiful dark wood interior. It was here that John Andre was imprisoned before he was hanged. Here where he wrote the letters to George Washington, the originals framed on the walls along with many other cool artifacts for history nerds, pleading for his life after the trial. To no avail. The site of his hanging is a tiny park up a residential street a few blocks away. Ask the owner for directions.

After a hearty repast and perhaps just one beer made of hops grown right in Rockland County, begin the return journey by taking a right at the light outside the tavern (the only light in town) onto Rte. 8 east towards Sparkill. Head through Sparkill into Piermont. Make a left and continue north through Piermont past the firehouse and back into Nyack on Piermont Road as described above.

There you have it—the perfect Sunday brunch ride. My time on the bike for the longer Tappan loop was 65 minutes, and I'm no Lance Armstrong. It may not be enough for the aspiring racer, but if you like your exercise leavened with a bit of history a bit of camaraderie, this is the ride for you. And if you do partake of a schooner of beer, hoist one for George. If John Andre and Benedict Arnold had their way, we might all still have British accents.

This article was originally published on Nyack News and Views on 10/2/2021.